Riding in the truck with Linda and Dennis while they ministered made me feel closer to God than any other assignment I can remember. It was hard to convey the depth of their love for those whom most of us have little love for, but I was honored she was willing to share her story and time with me. 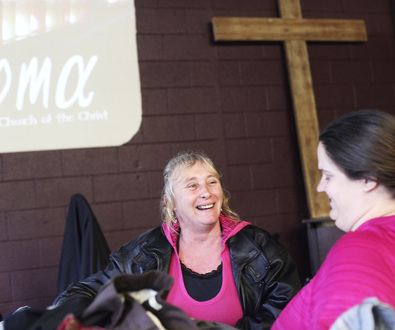 Photo by Thomas Patterson | Statesman Journal
Linda Wollertsen
Age: 48
Family: Husband, Dennis, 50; three children, three stepchildren and three grandchildren
Hometown: Newport Beach, Calif.; she grew up in Hubbard
Education: Through eighth grade; later got her GED
Occupation: Laid off from her job working in career development for the developmentally disabled, Linda spends her days assisting the homeless community of Salem through City Vibe Outreach Ministry
Years of sobriety: 16 in July
Pets: Lots of fish, though the only one who had a name —Willis —passed away recently
Favorite pastime: Spending time with her friends and family
Quote she lives by: "Preach the Gospel at all times —if necessary, use words."
If you keep your eyes open, you might spot a certain red 1993 Dodge pickup with a canopy as it cruises around Salem.

In the back of the truck, there is a huge white cooler filled with donated food and assorted goods, such as a new pants or baby wipes. Sometimes, it tows a trailer full of furniture. In the front are Linda and Dennis Wollertsen.

Linda has bright blue eyes, a delicate air and blond hair, while her husband, Dennis, has a bulldog chest, closely cropped hair and a booming voice.

They head to the offramps and to big box parking lots. They walk behind Dumpsters and through empty lots. They go to visit the people that many try to avoid.

Linda and Dennis are on a mission to unconditionally love and care for the homeless in Salem. Five days a week, they put time in for City Vibe Outreach Ministry through West Salem Foursquare Church, but their ties to the homeless community go deeper than your average volunteer.

Over the 15 years she's been working with them, Linda has gotten to know the rhythms of the community well. They panhandle, or "flag," in shifts, Linda said, with most corners having between two and 10 people. If someone's gotten an especially good "drop" —maybe a few fast-food sandwiches and $5 —they might let someone else on early. But for the most part they stick to the schedule, and Linda and Dennis know where they are.

On a recent Wednesday, they were headed out to Cops Corner, Highway 22's offramp onto Lancaster Drive, so named because it's where cops turn to go to the county jail.

They had a new pair of size 32/34 pants to give Richard, a tall Vietnam vet with wavy blond hair.

They pulled off to the side of the offramp and carefully hopped out of the truck.

Richard stood several yards away holding a battered sign. After dropping the pants off by his "bucket" — the stuff he carried with him —they stopped to chat.

"I don't know who the hell these people are," he deadpanned, then all three of them cracked up. Richard let them know that Rene, a man who stays around the Lancaster WinCo, is not doing well and is in desperate need of a new pair of pants.

So Linda and Dennis hopped back in the truck and headed for WinCo to check on Rene. En route, Linda's face lit up when she spotted Jimbo.

"We love this guy!," she exclaimed, adding that although she and Dennis try not to have favorites, they recently let Jimbo spend two weeks at their house as he recovered from surgery.

They asked Jimbo if he wanted any food, and then while they were chatting, Eric wandered up. He declined the offer of food — "We've got so much back at camp, man," then took a moment to fawn over Linda.

"She's a fine woman, man," he said. "Her and her husband do amazing things. She doesn't look down on you just because you're homeless."

Later, Linda and Dennis expanded on their motives: both have been in the men's shoes, they said, addicted and homeless. They found their redemption through sobriety, and through loving others unconditionally, as they see Jesus loving them.

Linda mentioned a quote from St. Francis that they try to live by: "Preach the gospel at all times —if necessary, use words."

But, Dennis said, they help anyone who will let them.

"We don't want any strings attached," he said. "You don't have to believe in God to be loved by us."

"Is it heartbreaking? Yes, it's very heartbreaking," Linda said. "But there were many people who cried over me."

Besides the food and coordinating needs —for example, bus passes are very important for those who are trying to find work — Lindaand Dennis' ultimate goal is to get them off the streets, to help them get in touch with resources, into apartments and into recovery if necessary.

"Anybody can get them into an apartment ... say, 'Congratulations!' and walk away," Linda said, adding that recovery comes from loving support. "We call it walking the second mile."

Their shared life is meant to serve as a model of stability. They live in a modest but tidy home on a small plot out in the country, overlooking hills and vineyards. Their landlord, they said, is very generous and has made them an excellent deal. Each 4th of July, they hold an open house that anyone can come to, so long as they are clean and sober.

Lately, though, life has been difficult. In December 2009, Dennis was laid off from a job designing and manufacturing RVs; in May of 2010, Linda was laid off from her job working in career counseling for the developmentally disabled in Dallas, a job she'd held for seven years.

A job tough market is made even harder, she said, because she has an eighth-grade education (though she later got her GED) and both of them have thorny histories.

"I send out resumés and cover letters every day," she said. "And I never get a call back."

She and Dennis said that no one will hire them for lower-paying jobs, and they are relying on Linda's unemployment, which will run out at the end of May if there is no extension. Shortly thereafter, Linda said, they themselves will likely be homeless.

But they stay optimistic, looking toward the future. One surprising thing? The born-again Christian wants to go to the Sin City in two years for her 50th birthday.

"I love the casinos. I love the decor," Linda said about Las Vegas. "They have great big chandeliers that hang down from the ceiling."

"And they have a whole store of M&M's," Dennis interjected, and his enthusiasm made Linda laugh.

Their big night is Friday, when the couple puts on the "Dinner on the Green" potluck.

What began with them serving one man on the West Salem greenway in August has since evolved into a weekly event that draws 100 people or more to SOMA Church, a small storefront church in West Salem.

The headline on its website is "restoring broken lives." In person, it's just a large room with butter-colored walls, a teeny nursery off to the side and a bathroom.

This particular Friday was game/Mexican food night, which meant Yahtzee and Connect Four games on the rows of tables, corn chips, salsa and several types of casseroles.

An hour before dinner was served, Linda was beaming at how many people were already there, and how many had offered to help.

As she sat on a well-loved couch, people approached her one by one and gave her updates on their lives. The mamma cat gave birth and had four kittens. So-and-so is in real bad shape, and needs to go to the doctor. A homeless man brings a bag of disposable razors that he wants to share with his fellow transients.

"So he's helping to provide for his friends' needs," Linda said, then was interrupted by a woman who gave her a used teddy bear in a faded Ducks T-shirt. It was a present, she said, for Linda to give her daughter.

The dinner, said Linda, is the way she and Dennis can establish the first-name sort of relationship that she feels is critical to give help. She wants it to feel like a family dinner, not a soup kitchen; everyone gets to serve themselves as much or as little as they want.

Her days going to soup kitchens to eat, she said, left her feeling "ashamed, less-than, hopeless."

"They just slop it on your plate," she said. "You don't get to choose what you want."

Dennis stood up to make his weekly announcements, then everyone sang happy birthday to Tammy, who teared up.

Rene — the same man who needed pants earlier in the week — gave the blessing. He was one of the ones Dennis picked up in the van runs he makes before the dinner.

"Dear Lord," he started. "Bless these angels that watch over us."

This year, Linda and Dennis both celebrate their 16th year of sobriety, Linda in July and Dennis in December. But from ages 13 to 32, Linda was addicted to meth. She started in eighth grade, she said, when her 16-year-old boyfriend offered her some.

The addiction was instantaneous and lasted 19 years.

"I gave my children away to my sister to raise them," she said, "because I didn't want them to be dragged through the drugs and the alcohol and the crime."

In 1991, she left her second husband, whom she said was physically abusive, and ended up on the streets. She spent five years living under and around the Burnside bridge. Her addiction "spiraled out of control."

"I was trying to escape the shame and the guilt," she said. "How could I allow myself to live like that?"

And then, in 1994, she was sitting in church service and, she said, God spoke to her. She spent the next year trying to get sober, eventually starting a six-month intensive inpatient program.

The first seven days, she said, were hell.

"They call it the white knuckles," she said, "because you're gripping so hard, clenching so hard."

And then in outpatient treatment, she met Dennis. He, too, was recently off meth and alcohol after long-term abuse. For him it was love at first sight.

Linda took some convincing, and for three months, he pursued her. Six months later, they were married in a simple service. They've not been apart for more than 10 days since then.

By the wedding, both Linda and Dennis had started to repair the relationships with their children. That was 15 years ago, and today, they have a decorated guest room full of toys that is set aside for when their three grandchildren visit.

Linda credits her sister with helping salvage her relationships with her children.

"She never saw me as an addict," she said. "She saw me as a woman of worth, and value. ... My oldest son was the easiest to restore. He tells me now, 'Mom, I always had hope. I always knew you would get better.'"