Back when I was in charge of the Weekend section, it would come to pass now and again that I'd do a 15-minute phone interview with a celebrity, usually around State Fair time. I wish I could say I was all blasé — “Oh, whatever, celebrities, who caaaaaaaaaares?” — but the truth of the matter is that I always got excited. Really excited. And this excitement translated into asking Chris Farley-like questions.

Here was the usual progression:

Two days before interview: Tell self that I didn’t care, since the truth of the matter is that I don’t like most of pop culture, and as a result am only excited about a very small handful of celebrities (Parker Posey, Michael Ian Black, Jon Stewart and Billy Mays).
One day before interview: Begin preparing questions. Decide that I actually sort of love this person.
30 minutes before interview: Calm, cool, collected. Imagine self as Barbara Walters of Salem.
90 seconds before interview: Forget about impending interview; go to snack machine
3 minutes after interview was supposed to start: Call publicist. Beg for forgiveness, and one more chance.
Next 12 minutes: Stumbly star-struck mess.

Regardless of these tendencies, something I was pleased to discover is that most famous people are actually really, really nice and down-to-earth. Beneath their beautiful and very valuable skin lay a set of interconnected organs. Celebrities: they're just like us! Except Joel McHale, who is the worst ever.

So here are five brief brushes with fame:

Oh my goodness gracious, Katy Perry is a nice human being. She is so, so nice. Nice as the day is long. So nice. She came to the Oregon State Fair back in 2009, which even at the time seemed like too small a venue for her, and so 15 minutes on the horn it was.

Katy — and I want to say this in the most delicate way possible — but Katy is a great pop star. She is a wonderful performer, and dancer, and a kind human being who loves baby animals as much as I do, and named her cat Kitty Purry. She also maybe did not miss her calling as a particle astrophysicist, if you know what I mean.

Nonetheless, we spent most of the interview talking about lipstick and CuteOverload.com, and then I told her about a tumblr I loved at the time, Animals With Casts, so that was wonderful. Even if she did describe herself, at one point, as "dressed to the nineness."

I will be honest: Before the interview, I had never really thought that much about Naomi Judd one way or another. I like the Judds fine, although not in an obsessive way.

I LOVED her. I was ready to abandon my life in Salem to become a full-time platonic Naomi Judd groupie — brushing her hair for her, baking her cupcakes, telling her how much I love her.

In short: Naomi Judd is amazing. She is warm and friendly and down-to-earth and confirmed what I've been saying all along, which is that Cetaphil is the best thing you can do for your skin, even though it looks cheap and only costs $5 at the drugstore. Also — I am not kidding — after we hung up, she faxed me a corndog recipe. It was extraordinary to realize there was one moment in Naomi Judd's life when she: 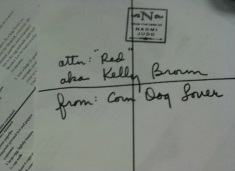 1. Walked through what I'm sure is a beautiful Nashville home into her office;
2. Photocopied a recipe out of a book;
3. Wrote Attn: "Red" aka Kelly Brown, From: Corn Dog Lover on the cover sheet;
4. Faxed it on letterhead that said "From the Desk of Naomi Judd" by
5. Dialing the Statesman Journal's fax machine, which resulted in
6. My heart exploding with happiness

I interviewed the Duchess of York when she came as a speaker for the Medical Foundation of Marion & Polk Counties, back in 2009. This was before all that most recent tabloid ugliness, but after quite the, um, splashy history.

She was precisely the way you hope someone who is Prince William's aunt would be, which is to say, super gracious and polished but also nice enough to compliment a 23-year-old on her purple tights. It might just be because we are both redheads. I'm telling you, redheads like other redheads. We have an understanding.

So then, when the news came out that she had tried to sell paparazzi access to her ex-husband, I was like, eh, whatever. I'm sure she had her reasons. Who are we to question a duchess?

I was going to tell the whole story, but I don't have it in me.

Suffice it to say this: I was so, so excited to talk to Joel McHale on the phone, because I LOVED him. I was so happy-nervous that at the beginning of the conversation, I accidentally said "Talk Soup" instead of "The Soup," which is correct name of his show. I cringed and apologized instantly, but it was too late.

We were then on a very, very fast descent that started with him saying, "That is NOT the name of my show. That's NOT it. Ugh. Did you even prepare for this?" and ended 11 minutes later with me quietly hanging up the phone, then crying.

Sometimes, a deep sadness lodges itself in you, a grain of sand in an oyster. And rather than just spitting it back out into the ocean, you hold it close to you, adding layers and depth and understanding. And then one day, it's not a grain of sand anymore, but a pearl. A pearl of sadness, yes, but also joy, depending on how the light catches it. Such are my feelings on the passing of Billy Mays.

Obviously, Billy Mays needs no introduction, but I want to talk about him anyway. I'd had an ongoing obsession with Billy Mays since high school, when my best friend Anne and I would stay up late watching infomercials. He was the undisputed king of of the direct-sell. He started shilling weird products on a boardwalk (think those dudes in Columbia Hall during the state fair) and ended up a multimillionaire, with his own reality show and laundry list of products.

Back in the day, before Congress made a law that said commercials couldn't be louder than regular programming (really, they did that. Thanks, Congress!) So you'd be in bed, watching TV, sort of falling asleep, and like a persuasive foghorn from the darkness, Billy would boom:
So then, in 2009, when Snuggies and Bumpits were ascendant, it seemed right to do a trend piece on the Golden Age of Infomercials.

"Maybe," I thought to myself. "Maybe ... maybe I could interview Billy." And then I chastised myself for daring to dream. But just in case, I placed a call to his publicist. Weeks went by. The story ran, without Billy's input.

And then, one random Wednesday afternoon, or Tuesday morning, a phone rang.

We were only scheduled to talk for 15 minutes, but ended up talking for an hour. Most of the time, he was very soft-spoken. Only once did he do the voice.

I've heard, and believe to be true, that one of the most beautiful mechanisms of the human brain is that as we move further away from something, we retain the good memories and sort of forget the bad. The grey clouds evaporate in the distance, leaving only a sunny, hazy glow. So I can't promise this is verbatim. This is a memory that resides in my heart, not my brain.

Billy Mays pitched me. To me. On the phone.

He then promised me that this would not be the last time we would speak, that he had a GREAT time talking to me and we would meet in person VERY soon. But we wouldn't.

They say it's better to have loved and lost, but nothing prepared me for a sharp, piercing pain of June 28, 2009. At first, I didn't believe it. It couldn't be true. Billy couldn't be dead.

But he was, apparently, of a heart condition compounded by cocaine use. Which, honestly, in retrospect, didn't feel super super surprising, considering how fast he talked and how enthusiastic he was about everything.

That wasn't what was important. Maybe Billy did party. Who cares? He was astonishingly nice and cool to a random reporter who loved him, as (from what I've heard) he was to almost everyone.

I feel sad about most celebrity deaths when they happen. But for no one but Billy do I feel an ongoing sadness — not every day, obviously, but several times a year. I hope, wherever he is, that he is coming up with increasingly ridiculous claims, selling the heck out of gadgets that you don't need but want, and having the best time ever. I miss you, Billy.