The Beginning and End of My Fencing Career 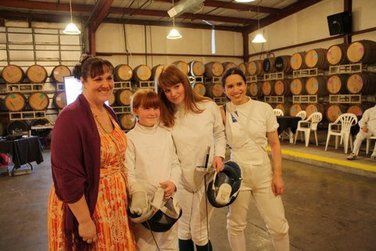 Ugh. This still makes me cringe when I think about it. Honestly, I'd been hoping to make it all the way through my life without once ... well, just read it. It was a tough time for me, but even more so for that small redhead beside me. P.S., Isabel totally went to Princeton. So there you go.

At around 9:45 on Saturday evening, I was hoping that the floor of the Eola Hills Wine Cellars barrel room might open up and I would fall to the center of the earth. Down, down, down, to a place where there were no crying 10-year-olds, a place where people weren't watching me, a place where I'd not agreed to be the "celebrity" guest "fencer" at the Aldo Nadi Casino Night fundraiser.

I was asked to be the guest fencer a few months ago, and it seemed like a good way to try fencing, which was an unrealized childhood semi-dream. I'd always kind of wanted to do it, but not enough to, you know, actually do it. Here was my chance.

It feels really, really weird to be asked as a "celebrity." Whenever a guest celebrity is touted, you show up and it's the weekend weather guy or someone equally local D-list. And now I am the one people are disappointed by!

The pitch was that I'd fence against Megan, 10, a very talented young fighter who also has long red hair and bangs and looks a lot like me. It was the clash of the larger and smaller, but similar-looking, redheads.

I got an hourlong lesson in advance from Jill Summers, the executive director of Salem Classical Fencing. My hand-eye coordination and motor skills aren't the greatest, so there was a lot of talk like, "Go for my arm! OK, well, no, that's OK, if you don't hit the arm go for the chest. My chest. Hit me in the chest," and I'd be kind of jabbing the sword about 6 inches to the right of Jill, and it was obvious that I hadn't missed my calling as a great fencer.

I arrived at Eola Hills on the night-of, and before I knew it, it was time to get in the fencing outfit and warm up.

Isabel, who served as my coach for the evening, is 17 and a really, really good fencer. Like nationally ranked, people-whispering-about-her-going-to-the-Olympics good. She has wavy brown hair that goes most of the way down her back, large brown eyes and a vaguely Joan of Arc-ish air, an effect enhanced by the fact that she often walks around carrying a sword.

Later in the evening, she fought in the finals, where she went up against a guy that looked kind of like Justin Timberlake and was really into strategic leaping. She lost by two points, but she will still lead the French army to many key victories, so don't you worry about Isabel.

Everyone had warned me ahead of time that Megan was a pitbull and would rush me, so I should give her a taste of her own medicine.

The deal was that we would do rounds to five "touchés" —the ends of the sword have a little tip that, when pushed, makes a bell chime, and that's a point. We were doing épée, in which —this will be significant in a bit —all of the body is a valid target. You fight using an épée, a very thin, nonsharp blade.

We were doing best two out of three rounds. You fight up and down this area called "the strip," starting at opposite ends. The strip is 40 feet long and 5 to 10 feet wide. Each fencer is attached via cable to a little computer that keeps score.

As soon as we started, I charged down the lane using a motion that, later, more than one person would describe as "galloping," as in "You looked good out there besides that galloping thing you were doing." So I'd gallop really quickly toward this small person, leading with my sword, lunging, parrying, trying to poke a 10-year-old with a blade. And the sad thing is, once I started, something kicked in, and I really, really wanted to win.

I'm almost always on the "flight" side of the "fight or flight" spectrum, but fencing put me back into this very calm but aggressive zone I'd get into during debate rounds in high school. "Focused" would be the key word here. I stopped thinking about how dumb I looked and could only see my opponent, my tiny, tiny opponent.

The adrenaline was pumping, things were happening fast, and I don't want to cause any further embarrassment with this retelling, so here is a sketchy outline of the last moments of the round: The score was 4 to 4, which meant the next person who "touched" would win. We were doing best two of three, and Megan had won the first one.

One redhead was feeling relieved that she would soon lose and be able to get out of fencing gear and back to the cocktail dress/high heels/white-wine drinking portion of the evening. That redhead charged down the strip, flailing and hoping she'd be hit.

Then, in slow and horrifying motion, an épée flew forward and another redhead was hit very hard in the, um, groin. Tears welled in blue eyes and splashed onto small pink cheeks. A small, protective clump formed around that redhead, while the other looked on in horror and waited to be arrested, which seemed like the only reasonable thing to happen to someone who'd just stabbed a 10-year-old in the crotch and made her cry.

Isabel, on the other hand, was smelling blood and noted that there shouldn't be any crying on the strip. Now, she said, I had the momentum on my side.

"You could actually pull this off," she said, looking really happy. This healthy spirit of competition is why Isabel may well go on to the Olympics.

Thankfully, Jill intervened and noted that because Megan had raised so much more money in bets than I had — $360 to $75 — that with her handicap, she'd won outright and we didn't have to fight the last round.

Also, I found out later that my sword was two inches longer than Megan's. Her coach noted that, had we had swords the same length, I wouldn't have stood a chance. If you add this to the height and arm length difference, I probably had a good 10-inch advantage, and I still didn't win.

Anyway, you may consider this my official retirement from fencing. There were some laughs, some tears, some personal-area stabbings and that proud 0-1 record.

K. Williams Brown is the entertainment reporter for the Statesman Journal. She really hopes there is no video footage of the fight floating around.